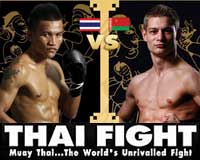 Review: 2012-12-16, the second fight between Andrei Kulebin and Singmanee Kaewsamrit was a very technical and close match but not as spectacular: two stars. Andrei Kulebin (144-11-0) entered as the No.12 welterweight in the world while Singmanee Kaewsamrit (138-23-4) entered as the No.6 super lightweight. In their first fight (June 24, 2012) Singmanee defeated Kulebin by decision, this second fight is the 67kg final of Thai Fight 2012; undercard of Buakaw Por Pramuk vs Vitaly Gurkov. Watch the video!