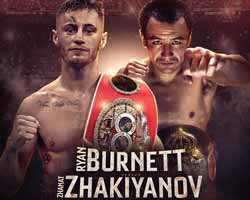 Review by AllTheBestFights.com: 2017-10-21, pretty good fight between Ryan Burnett and Zhanat Zhakiyanov: it gets three stars.

The undefeated Ibf Bw champion Ryan Burnett entered this fight with a perfect boxing record of 17-0-0 (9 knockouts) and he is ranked as the No.5 bantamweight in the world (currently the #1 in this division is Luis Nery). He has already fought twice in 2017 winning over Joseafat Reyes and Lee Haskins (=Haskins vs Burnett).
His opponent, the Wba Bw champion Zhanat Zhakiyanov, has a record of 27-1-0 (18 knockouts) and he entered as the No.13 in the same weight class. He suffered his only loss when he faced Sakhib Usarov in 2008, since then he has won 22 consecutive bouts defeating Rau’shee Warren in his last one (=Warren vs Zhakiyanov). Burnett vs Zhakiyanov is valid for the IBF and WBA super world bantamweight titles. Watch the video and rate this fight!