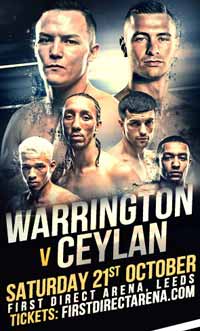 Review by AllTheBestFights.com: 2017-10-21, good fight between Josh Warrington and Dennis Ceylan: it gets three stars.

Both undefeated, the Englishman Josh Warrington entered this fight with a perfect record of 25-0-0 (5 knockouts) and he is ranked as the No.8 featherweight in the world (currently the #1 in this division is Leo Santa Cruz) while his opponent, Dennis Ceylan, has an official boxing record of 18-0-2 (8 knockouts) and he entered as the No.35 in the same weight class. In their last three fights Warrington has beat Hisashi Amagasa (=Warrington vs Amagasa), Patrick Hyland (=Warrington vs Hyland) and Kiko Martinez (=Warrington vs Martinez) while Ceylan has defeated Walter Estrada and Ryan Walsh but then he has drawn with Isaac Lowe. Warrington vs Ceylan, IBF World featherweight title final eliminator. Watch the video and rate this fight!