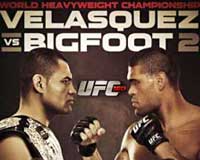 Review: 2013-05-25, pretty good fight between Cain Velasquez and Antonio ‘Pezao’ Silva but it is not enough to get three stars. Cain Velasquez (11-1-0, 82% finishing rate – curiously he has never won by submission) entered as the No.1 heavyweight in the world while Antonio ‘Bigfoot’ Silva (18-4-0, 89% finishing rate) entered as the No.4. In their first fight Velasquez defeated ‘Bigfoot’ Silva by TKO in the first round (May 26, 2012); this second fight is valid for the UFC heavyweight title, main event of UFC 160. Watch the video!