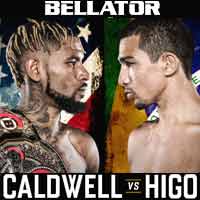 Review by AllTheBestFights.com: 2018-03-02, pretty good finish between Darrion Caldwell and Leandro Higo but it is not enough to get three stars: it gets two.

The Bellator Bw champion Darrion Caldwell entered this fight with a professional mma record of 11-1-0 (45% finishing rate) and he is ranked as the No.6 bantamweight in the world (currently the #1 in this division is TJ Dillashaw). He lost to Joe Taimanglo in 2016 (Caldwell vs Taimanglo I) but then he took revenge on him (Taimanglo vs Caldwell II) and defeated Eduardo Dantas (Eduardo Dantas vs Darrion Caldwell).
His opponent, Leandro Higo, has an official record of 18-3-0 (72% finishing rate) and he entered as the No.17 in the same weight class. ‘Pitbull’ Higo fought three times last year beating Steven Peterson and Joe Taimanglo but between these two bouts he lost to Eduardo Dantas (Eduardo Dantas vs Leandro Higo). Caldwell vs Higo, main event of Bellator 195, is valid for the Bellator bantamweight title (Caldwell’s first defense); they also faced each other a second time on May 21, 2021 (Darrion Caldwell vs Leandro Higo 2). Watch the video and rate this fight!