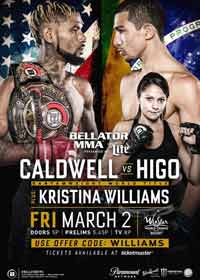 Review by AllTheBestFights.com: 2018-03-02, pretty good fight between Joe Warren and Joe Taimanglo: it gets three stars.

The former Bellator Fw and Bw champion Joe Warren entered this fight with a pro mma record of 15-6-0 (33% finishing rate) and he is ranked as the No.18 bantamweight in the world. He lost to Eduardo Dantas in 2016 (Dantas vs Warren 2) but he came back to win in 2017 with Steve Garcia (Joe Warren vs Steve Garcia).
His opponent, Joe Taimanglo, has a record of 23-8-1 (74% finishing rate) and he entered as the No.32 in the same weight class but he comes off two consecutive losses, against Darrion Caldwell (Joe Taimanglo vs Darrion Caldwell 2) and Leandro Higo. Taimanglo vs Warren is on the undercard of Darrion Caldwell vs Leandro Higo – Bellator 195. Watch the video and rate this fight!