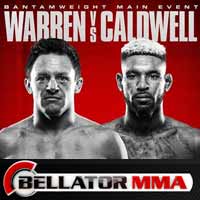 Review by AllTheBestFights.com: 2016-03-04, pretty good finish between Joe Warren and Darrion Caldwell: it gets three stars.

The former Bellator Fw and Bw champion and 2006 Greco-Roman world champion Joe Warren entered this fight with a professional mma record of 13-4-0 (31% finishing rate) and he is ranked as the No.11 bantamweight in the world. He fought twice last year losing to Marcos Galvao (=Warren vs Galvao 2) and beating LC Davis (=Warren vs Davis).
His opponent, the undefeated Darrion Caldwell, has a perfect record of 8-0-0 (50% finishing rate) and he entered as the No.19 in the same weight class. He also fought twice in 2015 winning over Rafael Silva (=Silva vs Caldwell) and Shawn Bunch. Warren vs Caldwell is the main event of the Bellator 151. Watch the video and rate this fight!