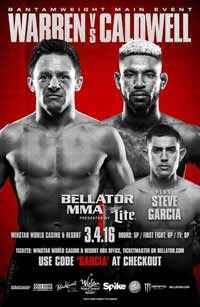 Review by AllTheBestFights.com: 2016-03-04, some good exchanges between Fernando Gonzalez and Gilbert Smith but it is not enough to get three stars: it gets two.

Fernando Gonzalez entered this fight with a pro mma record of 24-13-0 (67% finishing rate) and he is ranked as the No.39 welterweight in the world. He suffered two consecutive losses between 2013 and 2014, against Max Griffin and David Mitchell, but then he has won four bouts beating Curtis Millender in his last one (=Gonzalez vs Millender).
His opponent, Gilbert Smith, has a record of 12-4-0 (67% finishing rate) and he entered as the No.44 in the same weight class. He lost to Chidi Njokuani last year but then he defeated Benjamin Smith and Bristol Marunde. Gonzalez vs Smith is on the undercard of Joe Warren vs Darrion Caldwell – Bellator 151. Watch the video and rate this fight!