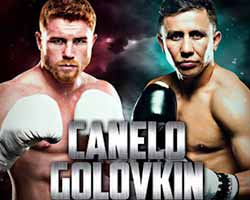 Review by AllTheBestFights.com: 2017-09-16, pretty good fight between Saul Alvarez and Gennady Golovkin: it gets three stars.

The former world champion in two different weight classes Saul Canelo Alvarez entered this fight with a professional record of 49-1-1 (34 knockouts) and he is ranked as the No.1 middleweight in the world. He suffered his only loss when he faced Floyd Mayweather Jr in 2013 (via majority decision, Mayweather vs Alvarez), since then Canelo has won seven consecutive fights defeating Amir Khan (4-stars fight, Canelo vs Khan), Liam Smith (=Canelo vs Smith) and Julio Cesar Chavez Jr in his last three (=Canelo vs Chavez Jr).
His opponent, the undefeated Wbc, Wba, Ibf and Ibo champion Gennady Golovkin, has an official boxing record of 37-0-0 (33 KOs=89%) and he entered as the No.2 in the same weight class. GGG fought twice in 2016, winning over Dominic Wade (=Golovkin vs Wade) and Kell Brook (4-stars fight, Golovkin vs Brook), and once in 2017, beating Daniel Jacobs (=Golovkin vs Jacobs). Gennady Golovkin vs Alvarez is valid for the WBC, WBA, IBF and IBO World middleweight titles (All held by Golovkin) but if Canelo wins, the Wbc and Ibo belts become vacant since Alvarez has not paid sanction fees for these organizations; they also faced each other a third time on September 17, 2022 (Saul Canelo Alvarez vs Gennady Golovkin 3)
Before rating the fight Canelo vs Golovkin, here are some words said by Gennady after Friday’s weigh-in at MGM Grand Hotel and Casino, Las Vegas:“I feel great. First of all I wanna thank my friends and of course thank you very much for all the fans, Mexican, American like everybody…” then the interviewer told to GGG that Canelo in an interview said “you may have the belts but you are a fake champion”, so Golovkin replied “I’ll see you tomorrow (smiling)…I’m still champion a long time…This is boxing, I’m a very true guy you know. Only God knows…”. And this is what Saul Alvarez said:“When I was born, I got rid of the fear. I’m not afraid of anyone, and we’re one day away from finding out who Canelo really is…I’m very happy for all the love and support from all these fans and I’ll give them 100 percent like I always do. I train hard and I’m disciplined […] They can say all they want but do you know what, we are one day away, and tomorrow all those words will go out the window”. Watch the video and rate this fight!