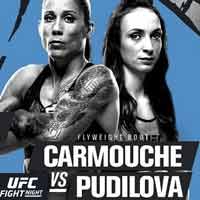 Review by AllTheBestFights.com: 2019-02-23, good exchanges on the ground between Liz Carmouche and Lucie Pudilova: it gets three stars.

The black belt in Bjj Liz Carmouche entered this fight with a professional record of 12-6-0 (67% finishing rate) and she is ranked as the No.2 women’s flyweight in the world. She lost to Alexis Davis in 2017 but she came back to win in 2018 against Jennifer Maia.
Her opponent, Lucie Pudilova, has a mma record of 8-3-0 (50% finishing rate) and she entered as the No.12 women’s bantamweight. She fought twice last year beating Sarah Moras and losing to Irene Aldana. Carmouche vs Pudilova is on the undercard of Jan Blachowicz vs Thiago Santos – UFC Fight Night 145 (UFC on ESPN+ 3). Watch the video and rate this fight!