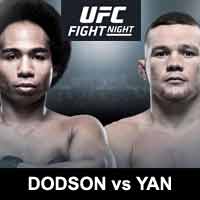 Review by AllTheBestFights.com: 2019-02-23, pretty good fight between John Dodson and Petr Yan: it gets three stars.

The black belt in gaidojutsu and Tuf 14 Bw tournament winner John Dodson entered this fight with a pro record of 20-10-0 (55% finishing rate) and he is ranked as the No.10 bantamweight in the world (currently the #1 in this division is TJ Dillashaw). He fought twice last year beating Pedro Munhoz (John Dodson vs Pedro Munhoz) and losing to Jimmie Rivera (John Dodson vs Jimmie Rivera).
His opponent, Petr Yan, has an official mma record of 11-1-0 (55% finishing rate) and he entered as the No.15 in the same weight class. He suffered his only loss when he faced Magomed Magomedov in 2016 (via split decision), since then he has won six bouts defeating Teruto Ishihara, Jin Soo Son and Douglas Silva de Andrade in 2018 (Petr Yan vs Douglas Silva de Andrade). Dodson vs Yan is on the undercard of Jan Blachowicz vs Thiago Santos – UFC Fight Night 145 (UFC on ESPN+ 3). Watch the video and rate this fight!