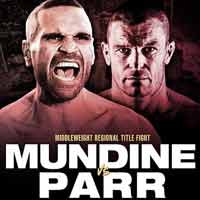 Review by AllTheBestFights.com: 2019-11-30, fight not particularly good between Anthony Mundine and John Wayne Parr: it gets two stars.

The 44-year-old former world champion in three different weight classes Anthony Mundine (he is one year older than Parr) entered this fight with a professional record of 48-9-0 (28 knockouts) and he is ranked as the No.14 middleweight in the world but he won just one out of his last four bouts, against Tommy Browne in 2018 (Anthony Mundine vs Tommy Browne), after this fight he has lost to Jeff Horn (Jeff Horn vs Anthony Mundine).
His opponent, the former WKN, WMC and ISKA kickboxing world champion John Wayne Parr, has an official boxing record of 10-3-0 (10 KOs=100% – while his kickboxing record is 99-33-0) but he is not ranked as he hasn’t fought since June 13, 2003 when JWP was defeated by Sakio Bika. In his las three kickboxing fights, between 2017 and 2019, he has beat Piergiulo Paolucci but then he has lost to Eder Lopes and Danilo Zanolini. Mundine vs JWP is the main event of the evening. Watch the video and rate this fight!