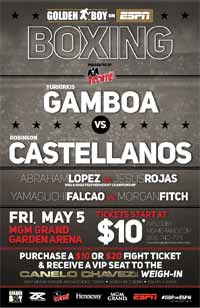 Review by AllTheBestFights.com: 2017-05-05, pretty good fight between Yuriorkis Gamboa and Robinson Castellanos: it gets three stars.

The 2004 Olympic flyweight gold medalist and former IBF and Wba Fw champion Yuriorkis Gamboa entered this fight with a professional boxing record of 26-1-0 (17 knockouts) and he is ranked as the No.18 lightweight in the world. He suffered his only loss when he faced Terence Crawford in 2014 (=Crawford vs Gamboa), after this bout he has won three times beating Rene Alvarado in 2017 (=Gamboa vs Alvarado).
His opponent, Robinson Castellanos, has an official record of 23-12-0 (13 knockouts) but he is not ranked as he hasn’t fought since March 5, 2016 when he was defeated by Oscar Escandon (=Castellanos vs Escandon). Yuriorkis Gamboa vs Robinson Castellanos is the main event of the evening . Watch the video and rate this fight!