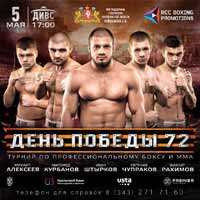 Review by AllTheBestFights.com: 2017-05-05, nice and tough fight between Evgeny Gradovich and Hugo Berrio: it gets three stars.

The former Ibf Fw champion Evgeny Gradovich entered this fight with a pro boxing record of 22-2-1 (9 knockouts) and he is ranked as the No.17 super bantamweight in the world. He fought three times last year beating Jesus Galicia (4-stars fight, Gradovich vs Galicia) and Eusebio Osejo but between these two bouts he lost to Oscar Valdez (=Valdez vs Gradovich).
His opponent, Hugo Berrio, has a record of 23-6-1 (14 knockouts) and he entered as the No.92 in the same weight class. He lost to Luis Melendez at the beginning of 2016 but then he has won three consecutive fights defeating Rafael Pujol in his last one. Evgeny Gradovich vs Hugo Berrio is valid for the WBA Inter-Continental super bantamweight title; undercard of Ivan Shtyrkov vs Philip De Fries. Watch the video and rate this fight!