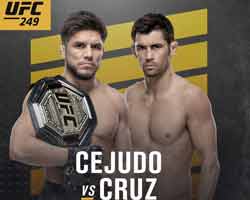 Review by AllTheBestFights.com: 2020-05-09, good fight between Henry Cejudo and Dominick Cruz: it gets three stars.

The 2008 Olympic freestyle wrestling gold medalist, former Ufc Flw and current Ufc Bw champion Henry Cejudo entered this fight with a pro mma record of 15-2-0 (47% ko/tko victory rate – he has never won via submission) and he is ranked as the No.1 bantamweight in the world. He lost two consecutive bouts in 2016, against Demetrious Johnson (in their first bout, Johnson vs Cejudo I) and with Joseph Benavidez (via split decision, Benavidez vs Cejudo), since then he has won five fights taking revenge on Johnson in 2018 (Demetrious Johnson vs Henry Cejudo 2) and beating TJ Dillashaw (Henry Cejudo vs TJ Dillashaw) and Marlon Moraes in 2019 (Henry Cejudo vs Marlon Moraes).
His opponent, the former Ufc Bw champ Dominick Cruz, has a record of 22-2-0 (36% finishing rate) but he is not ranked as he hasn’t fought since December 30, 2016 when he was defeated by Cody Garbrandt (Dominick Cruz vs Cody Garbrandt); before this bout, in 2016, he had beat TJ Dillashaw (TJ Dillashaw vs Dominick Cruz) and Urijah Faber (Dominick Cruz vs Urijah Faber 3). Cejudo vs Cruz is valid for the Ufc bantamweight title (Cejudo’s first defense); undercard of Tony Ferguson vs Justin Gaethje – UFC 249. Watch the video and rate this fight!