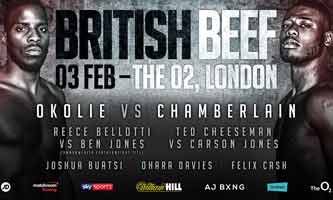 Review by AllTheBestFights.com: 2018-02-03, good fight between Carson Jones and Ted Cheeseman: it gets three stars.

Carson Jones entered this fight with a record of 40-12-3 (30 KOs=75%) and he is ranked as the No.34 super welterweight in the world but he comes off the loss against Antonio Margarito (=Margarito vs Jones).
His opponent, the undefeated Ted Cheeseman, has a perfect boxing record of 12-0-0 (8 knockouts) and he entered as the No.58 in the same weight class. He fought five times in 2017 beating Francesco Lezzi, Aristides Quintero and Tony Dixon in his last three. Cheeseman vs Jones is valid for the vacant WBA International super welterweight title; undercard of Lawrence Okolie vs Isaac Chamberlain. Watch the video and rate this fight!