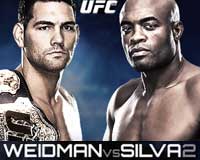 Review: 2013-12-28, worth watching fight thanks to a good start and a dramatic finish: the second fight between Chris Weidman and Anderson Silva gets three stars. The undefeated Chris Weidman (10-0-0, 70% finishing rate) entered as the No.1 middleweight in the world while Anderson Silva (33-5-0, 79% finishing rate) entered as the No.2. In their first fight (July 7, 2013) Weidman defeated Silva by ko and ‘The Spider’ lost the Ufc middleweight title after tenth consecutive defense; this second fight, main event of UFC 168, is valid again for the UFC middleweight title and it is Weidman’s first defense.
Here are some words said by Weidman before the fight: “100-percent, I know it’s going to be a better version of me…For the last camp, I went through hurricane Sandy, two surgeries, a year layoff. And even though, I wouldn’t let those excuses get in my mind before that fight. I didn’t make any excuses in my mind for, why I should lose? This time, there’s really no excuses for me to lose.” And this is what Anderson ‘The Spider’ Silva said “The last fight is in the past. I’m really looking forward to this next fight, and everything is going to be different, […] My mistakes in that fight, and this is the first time I’m saying this, were basic mistakes, […] Obviously we made a few changes. When you see a mistake, you’ve got to get back and see where that mistake is and change things around. But like I said, that’s in the past and everything is going to be different from now on…” Watch the video!

Their previous fight: Anderson Silva vs Chris Weidman I