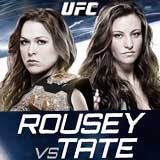 Review: 2013-12-28, exciting fight thanks to an aggressive start, excellent work on the ground, high pace and some nice takedowns: the second fight between Ronda Rousey and Miesha Tate is very close to get four stars (UFC Fight of the Night). The undefeated Ronda Rousey (7-0-0, 100% submission armbar victory rate in the first round) entered as the No.1 women’s bantamweight in the world while Miesha Tate (13-4-0, 69% finishing rate) entered as the No.9. In their first fight Rousey defeated Tate by submission (March 3, 2012); this second fight is valid for the UFC bantamweight title and it is on the undercard of Chris Weidman vs Anderson Silva 2 – UFC 168. Watch the video!