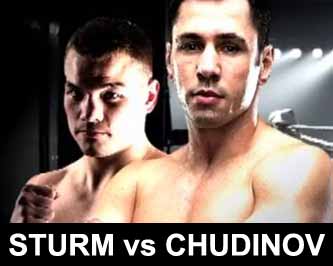 Review by AllTheBestFights.com: 2015-05-09, good performance by both fighters: Felix Sturm vs Fedor Chudinov gets three stars.

The former Wbo, Wba and Ibf middleweight world champion Felix Sturm entered this fight with a pro boxing record of 39-4-3 (18 knockouts) and he is ranked as the No.5 super middleweight in the world (currently the #1 in this division is Carl Froch) but his last victory occurred in 2013 when he faced Darren Barker (=Barker vs Sturm). In fact after this bout he lost the rematch with Sam Soliman (=Sturm vs Soliman 2) and he drew with Robert Stieglitz (=Sturm vs Stieglitz).
His opponent, the undefeated Fedor Chudinov, has a perfect record of 12-0-0 (10 KOs=83%) and he entered as the No.12 in the same weight class; he fought three times last year beating Stjepan Bozic, Andy Perez and Ben McCulloch (=Chudinov vs McCulloch). Sturm vs Chudinov is valid for the vacant WBA World super middleweight title. Watch the video and rate this fight!