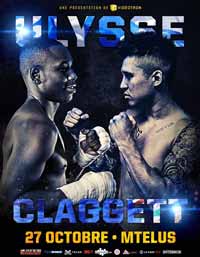 The undefeated Yves Ulysse Jr entered this fight with a perfect boxing record of 14-0-0 (9 knockouts) and he is ranked as the No.17 super lightweight in the world. He has already fought three times in 2017 defeating Jose Emilio Perea, Zachary Ochoa and Ricky Sismundo (=Ulysse vs Sismundo).
His opponent, Steve Claggett, has a record of 25-4-1 (17 knockouts) and he entered as the No.46 in the same weight class. He lost to Chris van Heerden last year but then he has beat Emmanuel Robles and Juan Bedolla Orozco. Ulysse vs Claggett is valid for the vacant IBF North American super lightweight title. Watch the video and rate this fight!