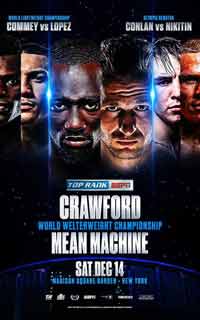 Review by AllTheBestFights.com: 2019-12-14, good fight between Michael Conlan and Vladimir Nikitin: it gets three stars.

Both undefeated and both former Olympian, Michael Conlan entered this fight with a professional boxing record of 12-0-0 (7 knockouts) and he is ranked as the No.23 featherweight in the world while his opponent, Vladimir Nikitin, has an official record of 3-0-0 (0 knockout) and he entered as the No.520 in the same weight class. In their last three fights Conlan has won over Jason Cunningham (Michael Conlan vs Jason Cunningham), Ruben Garcia Hernandez (Michael Conlan vs Ruben Garcia Hernandez) and Diego Alberto Ruiz (Michael Conlan vs Diego Alberto Ruiz) while Nikitin has beat Edward Kakembo, Clay Burns and Juan Tapia. They have already faced each others twice during their amateur career and Nikitin was the winner in both bouts. Conlan vs Nikitin is on the undercard of Terence Crawford vs Egidijus Kavaliauskas. Watch the video and rate this fight!