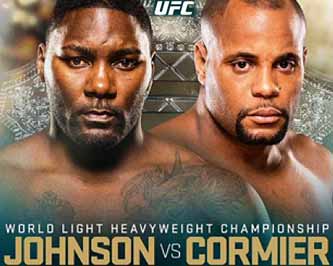 Review by AllTheBestFights.com: 2015-05-23, good fight between Daniel Cormier and Anthony Johnson: it gets three stars (UFC Performance of the Night).

Anthony Johnson entered this fight with a professional mma record of 19-4-0 (68% ko/tko victory rate – he has never won by submission) and he is ranked as the No.2 light-heavyweight in the world (currently the #1 in this division is Jon Jones). His last defeat occurred in 2012, against Vitor Belfort (=Belfort vs Johnson), since then he has won nine consecutive bouts, but just the last three in the Ufc: against Phil Davis (who had defeated Gustafsson in 2010, Davis vs Johnson), Antonio Rogerio Nogueira (=Johnson vs Nogueira) and Alexander Gustafsson (=Gustafsson vs Johnson).
His opponent, the former Olympic wrestler Daniel Cormier, has an official record of 15-1-0 (67% finishing rate) and he entered as the No.3 in the same weight class. ‘DC’ beat Patrick Cummins (=Cormier vs Cummins) and Dan Henderson in 2014 (=Henderson vs Cormier) but then he suffered his first loss in 2015 when he faced the champ Jon Jones (=Jones vs Cormier). ‘Rumble’ Johnson vs Cormier, main event of Ufc 187, is valid for the vacant UFC light heavyweight title (Jones was stripped of the belt on April 28th, 2015 for violating the Athlete Code of Conduct Policy and for his legal problems); they also faced each other a second time on April 8, 2017 (=Daniel Cormier vs Anthony Johnson 2). Watch the video and rate this fight!