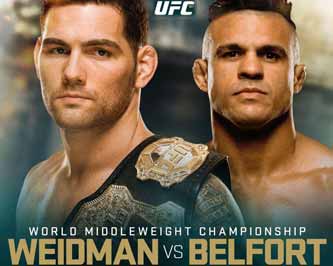 Review by AllTheBestFights.com: 2015-05-23, nice shots between Chris Weidman and Vitor Belfort: this fight gets three stars (UFC Performance of the Night).

The undefeated black belt in Brazilian jiu-jitsu Chris Weidman entered this fight with a perfect mma record of 12-0-0 (67% finishing rate) and he is ranked as the No.1 middleweight in the world. He won the Ufc Mw belt in 2013 when he faced Anderson Silva (=Silva vs Weidman I) and then defended his title twice: with ‘The Spyder’ in their rematch (=Weidman vs Silva II) and against Lyoto Machida in his only fight of 2014 (=Weidman vs Machida).
His opponent, the black belt in Bjj and judo and former Ufc Hw and light-Hw champion Vitor Belfort (he is 38 years old, eight years older than Weidman), has an official record of 24-10-0 (83% finishing rate) but he is not ranked as he hasn’t fought since November 9, 2013 when he defeated Dan Henderson (=Belfort vs Henderson 2). Before this bout he had won over Luke Rockhold (with one of the best mma knockouts of the year, Belfort vs Rockhold) and Michael Bisping (=Belfort vs Bisping); Belfort’s last defeat occurred in 2012, against #1 light-Hw Jon Jones (=Jones vs Belfort). Weidman vs Belfort, co-main event of Ufc 187, is valid for the Ufc middleweight title (Weidman’s third defense); undercard of Anthony Johnson vs Daniel Cormier. Watch the video and rate this fight!