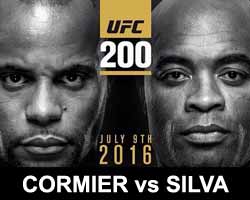 Review by AllTheBestFights.com: 2016-07-09, we think that the fighters have entered the octagon just for the money and not to fight: Daniel Cormier vs Anderson Silva gets two stars.

The former Strikeforce Hw and current Ufc light-Hw champion Daniel Cormier entered this fight with a pro record of 17-1-0 (65% finishing rate) and he is ranked as the No.2 light heavyweight in the world. ‘DC’ suffered his only loss against #1 Jon Jones last year (=Jones vs Cormier), after this bout he has won the vacant Ufc belt with Anthony Johnson (=Johnson vs Cormier) and defended it once against Alexander Gustafsson (via split decision, Cormier vs Gustafsson).
His opponent, the 41-year-old (4 years older than Cormier) black belt in Bjj, judo, tae-kwon-do and former Ufc Mw champion Anderson Silva, has an official mma record of 33-7-0 (79% finishing rate) and he entered as the No.16 middleweight but his last ‘clean’ victory occurred in 2012 when he faced Stephan Bonnar (=Silva vs Bonnar). In fact ‘The Spider, after this bout, was defeated twice by Chris Weidman (=Silva vs Weidman I and Weidman vs Silva II) and he came back to win just in 2015 against Nick Diaz (=Silva vs Diaz) but the result was overturned in a no-contest after the Brazilian tested positive for drostanolone and androsterone. Then Anderson ‘The Spider’ Silva has fought once in 2016 but he has lost to current #1 Ufc Mw champion Michael Bisping (controversial decision, Silva vs Bisping). Cormier vs Silva is on the undercard of Miesha Tate vs Amanda Nunes; on the original UFC 200 fight card the main event was Jon Jones vs Daniel Cormier 2 but on June 6, 2016, ‘Bones’ was pulled from the card after potentially failing a drug test and Tate-Nunes bout was promoted as the new main event. Watch the video and rate this fight!