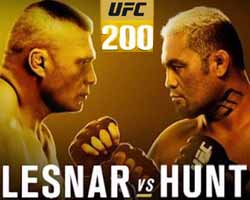 Review by AllTheBestFights.com: 2016-07-09, disappointing fight between Brock Lesnar and Mark Hunt: it gets two stars.

The four-time WWE (World Wrestling Entertainment) and former UFC Hw champion Brock Lesnar entered this fight with a professional mma record of 5-3-0 (80% finishing rate) but he is not ranked as he hasn’t fought since December 30, 2011 when he was defeated by Alistair Overeem (=Overeem vs Lesnar – Mark Hunt was defeated by ‘The Reem’ as well in 2008). Before this bout he had lost the Ufc belt against Cain Velasquez in 2010.
His opponent, the 42-year-old (Lesnar is four years younger) former K-1 world champion Mark Hunt, has an official record of 12-10-1 (75% ko/tko victory rate – he has never won via submission) and he entered as the No.6 heavyweight in the world. He suffered two consecutive losses between 2014 and 2015, against Fabricio Werdum (=Werdum vs Hunt) and current #1 Ufc Hw champion Stipe Miocic (=Hunt vs Miocic), but then he came back to win against Antonio ‘Bigfoot’ Silva (=Hunt vs Silva 2) and Frank Mir (=Hunt vs Mir). Lesnar had also faced Mir losing in 2008 (at his second professional mma fight) but then he took revenge on him in 2009 (at his first defense of the Ufc Hw title). Lesnar vs Hunt is on the undercard of Miesha Tate vs Amanda Nunes – UFC 200. Watch the video and rate this fight!