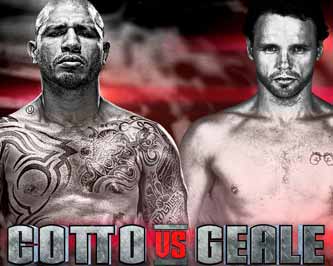 Review by AllTheBestFights.com: 2015-06-06, good fight between Miguel Cotto and Daniel Geale: it gets three stars.

The world champion in four different weight classes Miguel Angel Cotto entered this fight with a professional boxing record of 39-4-0 (32 KOs=82%) and he is ranked as the No.2 middleweight in the world (currently the #1 in this division is Gennady Golovkin). He suffered two consecutive defeats in 2012, against Floyd Mayweather Jr (=Mayweather vs Cotto) and Austin Trout (=Cotto vs Trout), but then he came back to win beating Delvin Rodriguez (=Cotto vs Rodriguez) and Sergio Martinez (=Martinez vs Cotto).
His opponent, the former Wba, Ibf and Ibo Mw champion Daniel Geale, has an official record of 31-3-0 (16 knockouts) and he entered as the No.7 in the same weight class. He fought three times last year winning over Garth Wood (=Geale vs Wood) and Jarrod Fletcher (=Geale vs Fletcher), but between these two bouts he lost to GGG Golovkin (=Golovkin vs Geale). Cotto vs Geale is valid for the WBC World middleweight title. Watch the video and rate this fight!