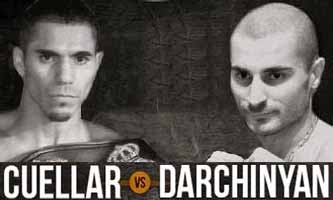 Review by AllTheBestFights.com: 2015-06-06, pretty good fight between Jesus Cuellar and Vic Darchinyan: it gets three stars.

Jesus Marcelo Andres Cuellar entered this fight with a pro boxing record of 26-1-0 (20 KOs=77%) and he is ranked as the No.7 featherweight in the world (currently the #1 in this division is Nicholas Walters). His only loss occurred in 2011 when he faced Oscar Escandon, since then he has collected nine consecutive victories winning the interim Wba title in 2013, against Claudio Marrero (=Marrero vs Cuellar), and successfully defended it three times, the last one with Ruben Tamayo (=Cuellar vs Tamayo).
His opponent, the former world champion in three different weight classes Vic Darchinyan, has a record of 40-7-1 (29 knockouts) but now he is 39 years old (11 years older than Cuellar) and he entered as the No.30 in the same weight class. He lost two consecutive bouts between 2013 and 2014: the rematch with Nonito Donaire (=Donaire vs Darchinyan 2) and his last world title shot against Nicholas Walters (=Donaire vs Walters); after this fight he came back to win beating Juan Jimenez (=Darchinyan vs Jimenez). ‘El Jinete’ Cuellar vs Darchinyan is valid for the WBA World featherweight title; undercard of Robert Guerrero vs Aaron Martinez. Watch the video and rate this fight!