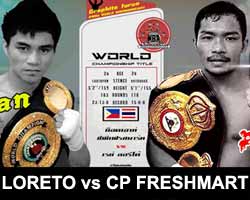 The undefeated Wba champion Knockout CP Freshmart (also known as Thammanoon Niyomtrong) entered this fight with a perfect boxing record of 15-0-0 (7 knockouts) and he is ranked as the No.2 minimumweight in the world (currently the #1 in this division is Wanheng Menayothin). In his last three fights he has beat Byron Rojas (=CP Freshmart vs Rojas), Shin Ono (=CP Freshmart vs Ono) and Go Odaira (=CP Freshmart vs Odaira).
His opponent, the former Ibo light-Flw champion Rey Loreto, has an official record of 23-13-0 (15 knockouts) and he entered as the No.4 in the same weight class. He suffered his last loss when he faced Benezer Alolod in 2013, since then he has won seven consecutive fights. Knockout CP Freshmart vs Rey Loreto is valid for the WBA World minimumweight title. Watch the video and rate this fight!