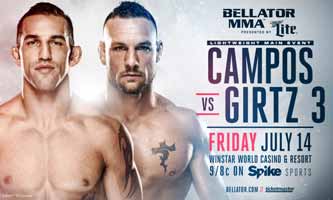 Review by AllTheBestFights.com: 2017-07-14, pretty good finish between John Salter and Kendall Grove but it is not enough to get three stars: it gets two.

John Salter entered this fight with a pro mma record of 13-3-0 (100% finishing rate) and he is ranked as the No.37 middleweight in the world. He suffered his last defeat when he faced Reggie Pena in 2012, since then he has won five bouts beating Brandon Halsey (=Halsey vs Salter) and Claudio Annicchiarico last year.
His opponent, the black belt in Brazilian jiu-jitsu and Tuf 3 tournament winner Kendall Grove, has a record of 23-16-0 (74% finishing rate) and he entered as the No.43 in the same weight class. He fought twice last year winning over Francisco France (=Grove vs France) and losing to Alexander Shlemenko (=Shlemenko vs Grove). John Salter vs Kendall Grove is on the undercard of Derek Campos vs Brandon Girtz 3 – Bellator 181. Watch the video and rate this fight!