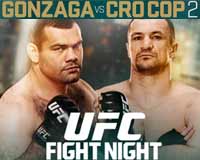 Review by AllTheBestFights.com: 2015-04-11, pretty good fight between Gabriel Gonzaga and Mirko ‘Cro Cop’ Filipovic: it gets three stars (UFC Fight of the Night).

The black belt in Brazilian jiu-jitsu Gabriel Gonzaga entered this fight with a professional mma record of 16-9-0 (100% finishing rate) and he is ranked as the No.23 heavyweight in the world having lost his last two fights, against Stipe Miocic (=Gonzaga vs Miocic) and Matt Mitrione (=Gonzaga vs Mitrione).
His opponent, the 40-year-old black belt in tae-kwon-do and former K-1 and Pride FC champion Mirko Filipovic (five years older than Gonzaga), has an official record of 30-11-2 (90% finishing rate) and he entered as the No.27 in the same weight class. He suffered three consecutive defeats in the Ufc between 2010 and 2011 (the last one against Roy Nelson, Nelson vs Filipovic) and then he fought for other mma promotions collecting three victories and one loss, against Alexey Oleinik (=Cro Cop vs Oleinik), while he beat Satoshi Ishii in his last bout (=Filipovic vs Ishii 2). In their first bout ‘Napao’ Gonzaga beat Filipovic by ko in the first round (April 21, 2007); this second bout is the main event of “UFC Fight Night 64: Gonzaga vs Cro Cop 2”. Watch the video and rate this fight!