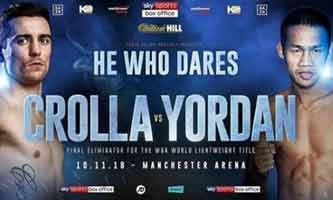 Review by AllTheBestFights.com: 2018-11-10, fight not particularly good between Anthony Crolla and Daud Yordan: it gets two stars.

The former Wba Lw champion Anthony Crolla entered this fight with a pro record of 33-6-3 (13 knockouts) and he is ranked as the No.7 lightweight in the world (currently the #1 in this division is Vasyl Lomachenko). He suffered two consecutive losses between 2016 and 2017, both against Jorge Linares (Crolla vs Linares I and Linares vs Crolla II) but then he has beat Ricky Burns (Anthony Crolla vs Ricky Burns) and Edson Ramirez (Anthony Crolla vs Edson Ramirez).
His opponent, the former world champion in two different weight classes Daud Cino Yordan, has an official boxing record of 38-3-0 (26 knockouts) and he entered as the No.12 in the same weight class. He suffered his last loss when he faced Simpiwe Vetyeka in 2013 (=Yordan vs Vetyeka), after this bout he has won eight consecutive fights beating Pavel Malikov in 2018. Crolla vs Yordan is on the undercard of Oleksandr Usyk vs Tony Bellew. Watch the video and rate this fight!