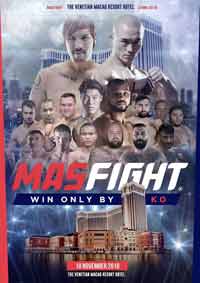 Review by AllTheBestFights.com: 2018-11-10, disappointing fight between Yi Long and Hong Man Choi: it gets one star!

The Shaolin kung-fu fighter Yi Long entered this fight with a professional kickboxing record of 61-12-1 (23 knockouts) but he comes off two consecutive defeats, against Sitthichai Sitsongpeenong (Sitthichai Sitsongpeenong vs Yi Long) and Saiyok Pumpanmuang; before these two bouts, in 2017, he had beat Marco Pique and Makoto Yoshida.
His opponent, Hong Man Choi, has an official record of 12-7-0 (7 knockouts) but his last kickboxing fight was in 2016 when he lost to Zhou Zhipeng; before this bout he had fought twice in 2008 losing to Badr Hari and Ray Sefo. Choi is also known as “Korean Colossus” since he is 7 ft 2 in tall (2.18 m) and he weighs 331 lbs (150 kg). Yi Long vs Choi is the main event of MAS Fight. Watch the video and rate this fight!

Where: The Venetian, Macau, China