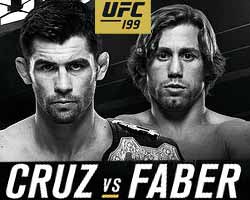 Review by AllTheBestFights.com: 2016-06-04, great fight between Dominick Cruz and Urijah Faber: it gets three stars.

The Ufc champion Dominick Cruz entered this fight with a pro mma record of 21-1-0 (38% finishing rate) and he is ranked as the No.1 bantamweight in the world. He suffered his only loss when he faced Urijah Faber in 2007, since then he has won 12 consecutive bouts taking revenge on Faber in 2011 and beating TJ Dillashaw in 2016 (=Dillashaw vs Cruz).
His opponent, Urijah Faber, has a record of 33-8-0 (79% finishing rate) and he entered as the No.3 in the same weight class. He fought twice last year losing to Frankie Edgar (=Edgar vs Faber) and winning over Frankie Saenz (=Faber vs Saenz). Cruz vs Faber 3 is valid for the Ufc bantamweight title (Cruz’s first defense); undercard of Luke Rockhold vs Michael Bisping 2 – UFC 199. Watch the video and rate this fight!