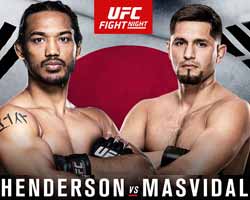 Review by AllTheBestFights.com: 2015-11-28, some good exchanges between Benson Henderson and Jorge Masvidal but it is not enough to get three stars: it gets two.

The black belt in tae-kwon-do, Bjj and former Ufc lightweight champion Benson Henderson entered this fight with a professional mma record of 22-5-0 (55% finishing rate) and he is ranked as the No.16 welterweight in the world. He suffered two consecutive defeats between 2014 and 2015, against Rafael dos Anjos (=Henderson vs dos Anjos) and Donald Cerrone (=Cerrone vs Henderson 3), but then he moved up in weight class and he came back to win beating Brandon Thatch (=Henderson vs Thatch).
His opponent, Jorge Masvidal, has an official record of 29-9-0 (45% finishing rate) and he entered as the No.21 in the same weight class. He has fought twice in 2015 losing to Al Iaquinta (=Al Iaquinta vs Masvidal) and winning over Cezar Ferreira (=Masvidal vs Ferreira). ‘Smooth’ Henderson vs Masvidal is the main event of UFC Fight Night 79. Watch the video and rate this fight!