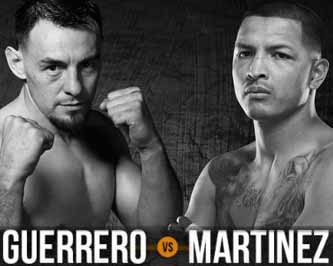 Review by AllTheBestFights.com: 2015-06-06, good first part of the fight with some nice toe-to-toe exchanges: Robert Guerrero vs Aaron Martinez gets three stars.

The former world champion in four different weight classes Robert Guerrero entered this fight with a boxing record of 32-3-1 (18 knockouts) and he is ranked as the No.12 welterweight in the world while his opponent, Aaron Martinez, has an official record of 19-3-1 (4 knockouts). Both boxers have lost two out of their last three bouts: Guerrero was defeated by Floyd Mayweather Jr (=Mayweather vs Guerrero) and Keith Thurman (=Thurman vs Guerrero), while Martinez lost to Jessie Vargas and Josesito Lopez (=Lopez vs Martinez). Between the two losses Guerrero won over Yoshihiro Kamegai (=Guerrero vs Kamegai) while Martinez beat Alberto Herrera. ‘The Ghost’ Guerrero vs Martinez is the main event of the evening. Watch the video and rate this fight!