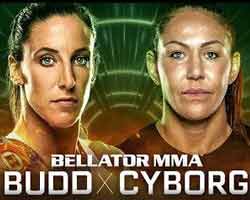 Review by AllTheBestFights.com: 2020-01-25, good fight between Julia Budd and Cris Cyborg Justino: it gets three stars. Moreover this match was ranked in the ‘Top 10 Mma Fights of the Year 2020‘ (ranking generated by our users).

The Bellator Fw champion Julia Budd entered this fight with a professional record of 13-2-0 (54% finishing rate) and she is ranked as the No.2 women’s featherweight in the world. She suffered her last loss when she faced Ronda Rousey in 2011, since then she has won ten consecutive bouts beating Arlene Blencowe (Julia Budd vs Arlene Blencowe 2), Talita Nogueira (Julia Budd vs Talita Nogueira) and Olga Rubin in her last three (Julia Budd vs Olga Rubin).
Her opponent, the former Ufc women’s Fw, Strikeforce and Invicta Fc cham Cristiane Cyborg Justino, has an official mma record of 21-2-0 (81% ko/tko victory rate – she has never won via submission) and she entered as the No.1 in the same weight class. She was defeated by Amanda Nunes in 2018 (Cris Cyborg Justino vs Amanda Nunes) but she came back to win against Felicia Spencer in 2019 (Cris Cyborg Justino vs Felicia Spencer). Budd vs Cyborg, main event of Bellator 238, is valid for the Bellator women’s featherweight title (Budd’s fourth defense). Watch the video and rate this fight!