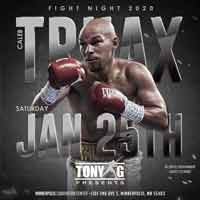 Review by AllTheBestFights.com: 2020-01-25, too much holding and too many interruptions between Caleb Truax and David Basajjamivule: it gets one star!

The former Ibf super-Mw champion Caleb Truax entered this fight with a professional boxing record of 30-4-2 (19 knockouts) and he is ranked as the No.15 super middleweight in the world. In his last three fights he lost to James DeGale (Caleb Truax vs James DeGale 2), beat Fabiano Soares and his last bout, with Peter Quillin, ended in a no-contest (Peter Quillin vs Caleb Truax).
His opponent, David Basajjamivule, has an official record of 16-4-1 (11 knockouts) but he is not ranked as he hasn’t fought since June 10, 2017 when he was defeated by Ruslan Fayfer, before this bout he had beat Mbaruku Kheri. Truax vs Basajjamivule is the main event of the evening. Watch the video and rate this fight!

Report broken video
« Julia Budd vs Cris Cyborg Justino full fight Video Bellator 238 – 2020
2020 BOXING fight – Danny Garcia vs Ivan Redkach – full fight Video »
HELP US!!! Since the CORONAVIRUS pandemic started, AllTheBestFights.com has struggled to survive! If you have enjoyed this website for the past 10 years, today we ask you for a little help: