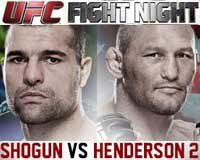 Review: 2014-03-23, some tough exchanges and a good finish: the second fight between Mauricio Rua and Dan Henderson gets three stars (UFC Fight of the Night and UFC Performance of the Night). Mauricio ‘Shogun’ Rua entered this fight with a professional mma record of 22-8-0 (91% finishing rate) and he is ranked as the No.10 light heavyweight in the world, he is a black belt in Brazilian jiu-jitsu but he lost twice in his last three fights.
His opponent, Dan Henderson, has an official record of 29-11-0 (52% finishing rate) and he entered as the No.9 in the same weight class, he is 43 years old (11 years older than Rua) and he comes off three consecutive defeats; currently the #1 in this division is Jon Jones). The last fight won by ‘Hendo’ was the first bout against ‘Shogun’ Rua in 2011, one of the best fights in mma history (=Henderson vs Shogun Rua I). Shogun Rua vs Henderson 2 is the main event of UFC Fight Night 39 – Ufn. Watch the video and rate this fight!