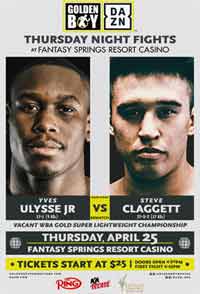 Review by AllTheBestFights.com: 2019-04-25, some good exchanges between Yves Ulysse Jr and Steve Claggett 2 but it is not enough to get three stars: it gets two.

Yves Ulysse Jr entered this fight with a professional boxing record of 17-1-0 (9 knockouts) and he is ranked as the No.22 super lightweight in the world. He suffered his only loss when he faced Steve Claggett in their first fight in 2017 (controversial decision, Ulysse vs Claggett I), after this bout
he has won over Cletus Seldin (Cletus Seldin vs Yves Ulysse Jr), Ernesto Espana and Maximilliano Becerra.
His opponent, Steve Claggett, has an official record of 27-5-2 (17 knockouts) and he entered as the No.45 in the same weight class. He lost to Danny O’Connor last year but then he has beat Petros Ananyan and has tied with Mathieu Germain. Ulysse vs Claggett 2 is the main event of the evening. Watch the video and rate this fight!