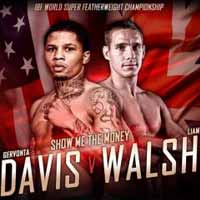 Review by AllTheBestFights.com: 2017-05-20, good fight between Gervonta Davis and Liam Walsh: it gets three stars.

Both undefeated, the IBF super-Fw champion Gervonta Davis entered this fight with a perfect record of 17-0-0 (16 KOs=94%) and he is ranked as the No.10 super featherweight in the world (currently the #1 in this division is Vasyl Lomachenko) while his opponent, the 31-year-old Liam Walsh (9 years older than Davis), has a boxing record of 21-0-0 (14 knockouts) and he entered as the No.18 in the same weight class. Both boxers fought twice in 2016: Davis beat Guillermo Avila and Mario Antonio Macias while Walsh defeated Troy James and Andrey Klimov (=Walsh vs Klimov); the American has also fought once in 2017 winning over Jose Pedraza (=Pedraza vs Davis). Gervonta Davis vs Liam Walsh is valid for the IBF World super featherweight title (Davis’ first defense). Watch the video and rate this fight!