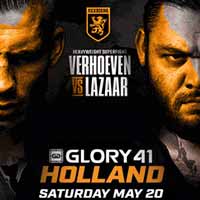 Review by AllTheBestFights.com: 2017-05-20, some good exchanges between Rico Verhoeven and Ismael Lazaar but it is not enough to get three stars: it gets two.

The Glory Hw champion Rico Verhoeven entered this fight with a pro kickboxing record of 50-10-1 (14 knockouts) and he is ranked as the No.1 heavyweight in the world. He lost to Andrei Herasimchuk in 2015 (=Verhoeven vs Herasimchuk) but then he has won six consecutive fights beating Mladen Brestovac (=Verhoeven vs Brestovac), Anderson Braddock Silva (= Verhoeven vs Silva) and Badr hari in 2016 (=Verhoeven vs Hari).
His opponent, the former Enfusion Hw champion Ismael Lazaar, has a record of 30-2-2 (15 knockouts) and he has already fought twice in 2017 losing to Martin Pacas and beating Atha Kasapis. Rico Verhoeven vs Ismael Lazaar is on the undercard of Hesdy Gerges vs Tomas Hron – Glory 41. Watch the video and rate this fight!