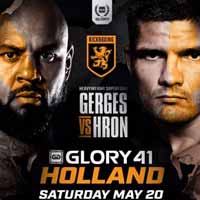 Review by AllTheBestFights.com: 2017-05-20, some good exchanges between Hesdy Gerges and Tomas Hron but it is not enough to get three stars: it gets two.

Hesdy Gerges entered this fight with a professional kickboxing record of 49-18-1 (23 knockouts) and he is ranked as the No.11 heavyweight in the world. He fought four times last year beating Gregory Tony but then he lost three consecutive fights: against Ismael Londt (=Londt vs Gerges 2), Guto Inocente (=Gerges vs Inocente) and Benjamin Adegbuyi.
His opponent, the former Wkn and Wka champion Tomas Hron (who replaces Chi-Lewis Perry), has an official record of 84-17-3 (30 knockouts) and he entered as the No.12 in the same weight class. He lost to Martin Pacas in 2016 but then he has won over Hicham Achalhi, Kirill Kornilov and Andrei Stoica. Hesdy Gerges vs Tomas Hron is the main event of Glory 41. Watch the video and rate this fight!