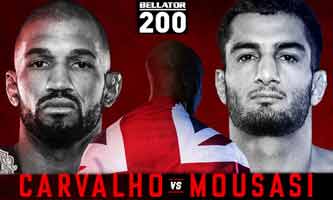 Review by AllTheBestFights.com: 2018-05-25, pretty good fight between Rafael Carvalho and Gegard Mousasi: it gets three stars.

The Bellator Mw champion Rafael Carvalho entered this fight with a pro mma record of 15-1-0 (80% ko/tko victory rate – he has never won via submission) and he is ranked as the No.23 middleweight in the world. He suffered his only loss at his pro mma debut in 2011, against Julio Cesar Araujo Fernandes, since then he has won 15 consecutive bouts beating Melvin Manhoef (Carvalho vs Manhoef II) and Alessio Sakara in 2017 (Rafael Carvalho vs Alessio Sakara).
His opponent, the black belt in judo and former Strikeforce light-Hw champion Gegard Mousasi, has a record of 43-6-2 (84% finishing rate) and he entered as the No.4 middleweight (currently the #1 in this division is Georges St Pierre). He lost to Uriah Hall in their first fight in 2015 (Mousasi vs Hall I) but then he has won six bouts taking revenge on Hall in 2016 (Mousasi vs Hall 2) and beating Chris Weidman (Weidman vs Mousasi) and Alexander Shlemenko in 2017 (Gegard Mousasi vs Alexander Shlemenko). Carvalho vs Mousasi, main event of Bellator 200, is valid for the Bellator middleweight title (Carvalho’s fourth defense). Watch the video and rate this fight!