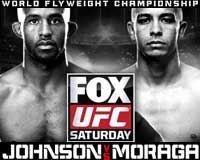 Review: 2013-07-27, Demetrious Johnson vs John Moraga gets three stars only thanks to a good finish (UFC Submission of the Night). Demetrious Johnson (17-2-1, 53% finishing rate) entered as the No.1 flyweight in the world while John Moraga (13-1-0, 61% finishing rate) entered as the No.5. Johnson vs Moraga, main event of UFC on Fox 8, is valid for the UFC flyweight title (Johnson’s second defense). Watch the video!