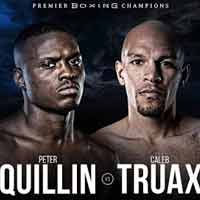 Review by AllTheBestFights.com: 2019-04-13, we hope to see a rematch soon: Peter Quillin vs Caleb Truax gets two stars.

The former Wbo Mw champion Peter Quillin entered this fight with a record of 34-1-1 (23 knockouts) and he is ranked as the No.15 super middleweight in the world. He lost to Daniel Jacobs in 2015 (Daniel Jacobs vs Peter Quillin) but then he has beat Dashon Johnson and J’Leon Love (Peter Quillin vs J’Leon Love).
His opponent, the former Ibf super-Mw champ Caleb Truax, has a boxing record of 30-4-2 (19 knockouts) and he entered as the No.14 in the same weight class. He fought twice last year losing the rematch with James DeGale (Caleb Truax vs James DeGale 2) and defeating Fabiano Soares. Quillin vs Truax is the main event of the evening. Watch the video and rate this fight!

Result: Click here to show the fight’s result
Peter Quillin vs Caleb Truax (NO Decision, Truax cut by an accidental headbutt at 3:00, round 2)

(Free embeddable video hosted on Facebook/youtube and not uploaded by AllTheBestFights)
https://www.youtube.com/watch?v=ZNtYtX1vS_s