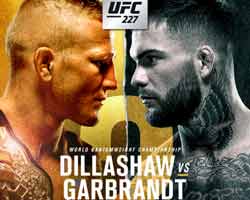 Review by AllTheBestFights.com: 2018-08-04, nice exchanges between TJ Dillashaw and Cody Garbrandt 2: it gets three stars (UFC Performance of the Night).

The current Ufc Bw champion TJ Dillashaw entered this fight with a professional mma record of 15-3-0 (67% finishing rate) and he is ranked as the No.1 bantamweight in the world. He lost to Dominick Cruz in 2016 (via split decision, Dillashaw vs Cruz), but then he has beat Raphael Assuncao (Dillashaw vs Assuncao 2), John Lineker (Dillashaw vs Lineker) and Garbrandt in their first fight (Cody Garbrandt vs TJ Dillashaw I).
His opponent, the former Ufc Bw champ Cody Garbrandt, has an official record of 11-1-0 (82% ko/tko victory rate – he has never won via submission) and he entered as the No.3 in the same weight class. Before losing to Dillashaw in 2017, he had fought four times in 2016 winning over Augusto Mendes (Garbrandt vs Mendes), Thomas Almeida (Almeida vs Garbrandt), Takeya Mizugaki (Garbrandt vs Mizugaki) and Dominick Cruz (Cruz vs Garbrandt). Dillashaw vs Garbrandt 2, main event of UFC 227, is valid for the Ufc bantamweight title (Dillashaw’s first defense). Watch the video and rate this fight!

Their previous fight: Cody Garbrandt vs TJ Dillashaw I