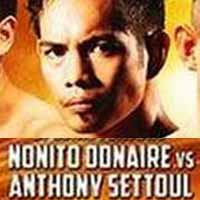 Review by AllTheBestFights.com: 2015-07-18, one sided fight between Nonito Donaire and Anthony Settoul: it gets two stars.

The former world champion in five different weight classes Nonito Donaire entered this fight with a pro boxing record of 34-3-0 (22 knockouts) and he is ranked as the No.4 super bantamweight in the world (currently the #1 in this division is Carl Frampton). He lost to Nicholas Walters last year (=Donaire vs Walters) but he came back to win in 2015 beating William Prado (=Donaire vs Prado).
His opponent, Anthony Settoul, has a record of 20-3-0 (8 knockouts) and he entered as the No.102 in the same weight class. He fought three times last year winning over Faycal Messaoudene and Ignac Kassai but between these two bouts he was defeated by Omar Lamiri. Donaire vs Settoul is on the undercard of Ik Yang vs Cesar Cuenca. Watch the video and rate this fight!