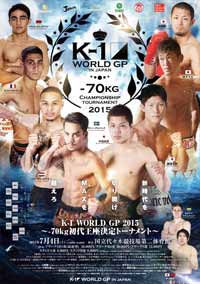 Review by AllTheBestFights.com: 2015-07-04, nice and tough exchanges between Marat Grigorian and Jordann Pikeur: it gets three stars.

Marat Grigorian entered this fight with a pro kickboxing record of 41-6-1 (23 knockouts – or 43-7-1 on wikipedia) and he is ranked as the No.8 super welterweight in the world while his opponent, the WMTA Benelux 70kg champion Jordann Pikeur, has an official record of 16-4-1 (5 knockouts). Grigorian vs Pikeur is the final of the K-1 World GP 2015 -70kg Championship Tournament, in the quarterfinals and semifinals Grigorian beat Yoichi Yamazaki and Makihira Keita while Pikeur defeated Daiki Watabe (four-stars-fight Pikeur vs Watabe) and Sanny Dahlbeck. Watch the video and rate this fight!