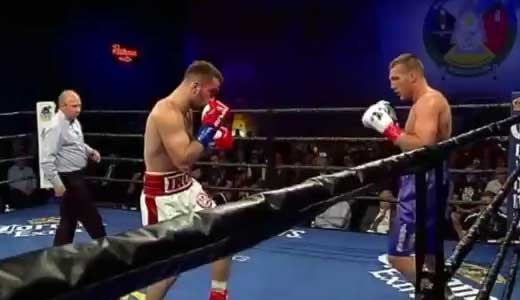 Review by AllTheBestFights.com: 2016-05-17, spectacular finish between Murat Gassiev and Jordan Shimmell: this is one of the best boxing fights of 2016 and it gets four stars!

The undefeated Murat Gassiev entered this fight with a perfect boxing record of 22-0-0 (16 knockouts) and he is ranked as the No.16 cruiserweight in the world. He fought four times last year beating Terrance Smith, Felix Cora Jr (=Gassiev vs Cora) and Rodney Moore but his last bout, against Isiah Thomas, ended in a no-contest (=Gassiev vs Thomas).
His opponent, Jordan Shimmell, has an official record of 20-1-0 (16 KOs=80%) and he entered as the No.50 in the same weight class. He lost to Isiah Thomas in 2015 but he came back to win in 2016 defeating Willis Lockett. Gassiev vs Shimmell is the main event of the evening. Watch the video and rate this fight!