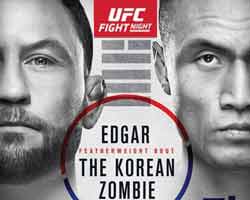 Review by AllTheBestFights.com: 2019-12-21, pretty good fight between Frankie Edgar and Chan Sung Jung: it gets three stars (UFC Performance of the Night).

The black belt in Brazilian jiu-jitsu and former Ufc Lw champion Frankie Edgar entered this fight with a pro mma record of 23-7-1 (48% finishing rate) and he is ranked as the No.5 featherweight in the world (currently the #1 in this division is Alexander Volkanovski) but he lost two out of his last three bouts, against Brian Ortega (Frankie Edgar vs Brian Ortega) and Max Holloway (Max Holloway vs Frankie Edgar); between these two bouts he beat Cub Swanson (Frankie Edgar vs Cub Swanson 2).
His opponent, the black belt in hapkido, tae-kwon-do and judo Chan Sung Jung, has a record of 15-5-0 (87% finishing rate) and he entered as the No.15 in the same weight class. He lost to Yair Rodriguez last year (Chan Sung Jung vs Yair Rodriguez) but he came back to win against Renato Moicano Carneiro in 2019 (Renato Moicano Carneiro vs Chan Sung Jung). Edgar vs Korean Zombie is the main event of UFC Fight Night 165. Watch the video and rate this fight!

The Korean Zombie gives Frankie Edgar the fastest loss of his MMA career.